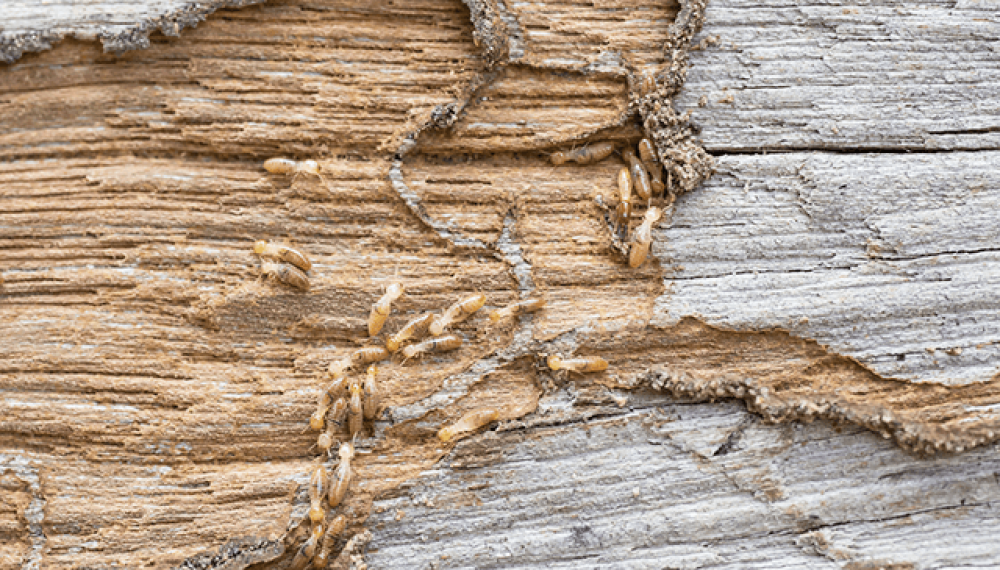 Where do termites come from?
The word "termite" comes from the latin "termes" & "tarmit" and from the greek "tetranien", meaning "a worm eating wood". Fossils of winged termites (alates) dating back to the Creataceous period (125 million years ago) have been found in China, Labrador, Australia, Africa and South America. Some drywood termites were also found in amber (fossilized tree sap) in the Baltics.

How often should I have my house checked for infestations?
Depending on the age, location and configuration of the structure, you should request an inspection every two to four years. It's long enough for a experienced and licensed inspector to detect any visible evidence of infestation and not too long to allow structural pests (termites, wood boring beetles and fungi) to create significant structural damage. Check also our FAQs page for tips on preventing termite infestations.

Why do termites swarm and when?
Swarms occur when some workers and soldiers mature into winged females and males (alates). They instinctively fly away to mate and start new colonies. Different species will swarm at various times and seasons. In Marin County, Subterranean termites mostly swarm on warm and humid spring days, while drywood termites tend to swarm in the heat of summer. Dampwood termites generally swarm in fall.

What's the biggest termite?
At 60 feet, the world's largest termite is the inflatable Termidor termite used as a traveling education and information center (see NPR report). Joking aside, it is unclear what is the biggest live termite. Many species compete for this title like the Australian Termite (Mastotermes darwiniensis) and the Arboreal Termite (Nasutitermes corniger) found in Central America and New Guinea. The Pacific Dampwood Termite (Zootermopsis angusticollis), which at 30mm with wings (15mm without) is among the largest, can be found right here in Marin and Sonoma Counties.

How many kinds of termites are there?
According to the University of Toronto, there are over 2761 species of termites within 282 generae. In northern California the most common families of species are
1) "Reticultermes hesperus" (Rhinotermitidae) or Western Subterranean Termite
2) "Incistermes minor" (Kalotermitidae) or Dark Western Drywood Termite, and
3) "Zootermopsis Angusticollis" (Hodotermitidae) or Pacific Dampwood Termite

What is a Xylophaous Insect?
It is an insect that feeds on wood and wood biproducts (paper, cardboard, partical board, plywood, etc.). Termites and wood boring beetles are xylophagous insects, while carpenter ants and carpenter bees are not. Thoug Carpenter ants infest wood members, they do not feed on wood but rather carve wood members for shelter. Ants feed on starches, sugars and other honeydew like products.

Can you tell a Termite from a Carpenter Ant?
It can be hard to differentiate a swarming termite (alate) from a winged carpenter ant. You're not alone because it is not easy given the many varieties of termites and ants out there. Here are a few critical differences that are fairly easy to spot with a naked eye... and the help of a small magnifying glass. Still! Don't forget to check with a California Licensed Professional Inspector. Ants: Elbowed antennae, narrow waists, separate thorax and abdomen, different size wings, longer legs. Termites: Straight antannae, thick waists, continuous thorax and abdomen, same size wings, shorter legs.

Are you isopterophobic?
Isopterophobia is the fear of wood eating insects (termites, beetles, fungus, carpenter ants etc.). Though termites are annoying when they swarm and may appear repulsive to some, they don't sting or bite and only feed on wood and cellulose bi-products (paper, cardboard, glue, starches, etc.). Termites belong to the "isoptera" order  and isopterophobes don't necessarily fear termites attacking them but rather the damage they can do to their homes. FYI: Fear of all insects is called entomophobia (from entomology the studies of insects).

Get YOUR Pest Assessment today.

Still not sure if you need our services?

Click on the links below to find more infomation.